The Angels of Mons

Did the Great Hidden Power, during 'those awful days at Mons, when the Allies retreated before the German hordes, send I angels to encourage them in the great fight for honour and liberty? The sceptical, of course, scout the stories of such visions, and describe them as- the hallucinations of wounded suffering soldiers.

'But from French and English soldiers, nurses and chaplains, come stories of the visitation of the "white comrade' who in some cases was St George, and in others St Michael the Archangel, and Joan of Are, at a period when it seemed as though nothing could save the crushing of the Allied. Absolute proof, of course, it is impossible to obtain.

Briefly, the story is this: At a certain moment of the retreat the whole of the British force was in great danger of being surrounded and annihilated. The critical point was a small corner held by a British regiment, which was attacked by overwhelming forces. Only 500 of the English were left, while some 10 000 Germans were opposing them, and to every one the position of the little band of soldiers looked absolutely desperate, At this moment, the story runs, one of the British soldiers invoked the aid of St. George and the holy angels, and then beheld a vision of the angels coming to the rescue.

Other people besides the soldier who invoked their aid seem to have seen the angels. In a letter quoted in the "Canadian Church Life' there is an account of two officers who saw the angel host. They expected annihilation, as they were almost helpless, when, to their amazement, the Germans stood like dazed men, and never so much as touched their guns or stirred until they had turned around and escaped by some cross-roads.

Miss Phillis Campbed, whose self-sacrificing devotion in the cause of the French Red Cross work has earned for her the honoured title of 'The Beloved of the Wounded,' has heard the story of how St. George saved our soldiers from annihilation from the lips of scores of men.

She relates how one night when she was attending the wounded, an English soldier, in one of the wagons, asked for a holy picture. 'It seemed an extraordinary thing to ask for In that awful scene,' says Miss Campbell, in the 'Occult. Review.'Miss,'said the soldier, 'please give me a picture of St. George. I want a picture or a medal, because I have seen St. George on a white horse. An R.F.A man lying near-by corroborated this seeming madness. 'It's true, sister,' he interjected; 'we all saw it,'

Miss Campbell questioned other men. Yes, they had seen St. Gorge come 'out of a funny-looking cloud." He was riding-a white horse and a sword above his head. Then came the order to advance and the Germans were in full flight. But why they had fled none could say, for the British were hopelessly out-numbered.

Men of the Irish Guards also told a similar story. The French testimony differed. some said it was Joan of Arch, that she was bare header, riding a white horse and flourishing a sword as she called 'Advance.' Others had seen Michael the Archangel, clad in gioden amour, bareheaded. riding a white horse and crying 'Victory' as he brandished his sword.

There was not the slightest doubt about the sincere belief in the visitation of the men who told the story. Among the eye-witnesses were officers of high rank and a Roman Catholic priest.

The Rev. Dr. Horton, the well known Congregationalist preacher, asked one of his young men if he had seen the 'white comrade.' 'No' he replied, 'but' I have seen the companion in White. and I believe in him. Nothing is impossible here, of the unseen becomes seen in times like these.

The testimony of Miss Sarah Marrable, the daughter of a well known cannon, is remarkable. The lady find the 17th verse of the 6th chapter of the Second Book of Kings of Biblical parallel to the story of the Angel of Mons. And although as she points out, the names of the men and officers who claim to have seen the angels are not know to us, there is no reason to cast doubt on the original story of the visitation which 'we mat expect in answer to our prayer for men continually exposed to danger.'

Posted by Geordie Gardiner at 01:12 No comments:

Type of Casualty:
Killed in Action


George Edwin Ellison fought in the first battle of the First World War that included British troops, four years earlier in the 1st battle of Mons in 1914.

After fighting or four years he was killed at 9.30 on the morning of 11th of November.

Fighting continued on the last day of the war up until 11 o'clock.

General Wright, of the 89th American Division, saw his men exhausted and knowing the nearby town of Stenay had bathing facilities he decided to take the town, so the men could wash.

There were over 300 American casualties in the town of Stenay, on the last day of the war as a consequence of the General's recklessness.

Frenchman Augustin Trebuchon, on his way to the River Meuse with information for troops on the availability of food was killed at 10.45 am.

Just before 11am, in an area near Mons, Canadian Private George Lawrence Price was involved in street fighting, on leaving a cottage from a back door he was shot and killed.

In the Argonne region. America soldier Henry Gunther was part of a final charge, against astonished German troops, he was killed at 10. 59 and is recognised as being the last soldier killed in the First World War.

Strange though it may seem, it is just a coincidence. Stranger things have happen, I am sure.

People are strange, when you're a stranger and nothing can be stranger than what people claim to see and with often reported celestial activity, people are bound to look to the clouds to see what they can see.

Both John Parr and George Edwin Ellison where buried in the same cemetery and as the years passed by the talk was of the sky and not of the spot where you stand to view, and wish you were a tree.

Then one day there was yet another "visitor."

Likely a sceptic, if you ask me.

And without a glance to the heavens he saw.

And was amazed, with awe and wonder that in over 90 years since the noise of man-made thunder

The lighting, was of such purity, that he could not help but see

How such can be

It being a coincidence

That there in rest

Is the headstone of one

Facing the other one

Was all for me

Who don't give a hoot

If you're dammed of blessed.

Posted by Geordie Gardiner at 11:32 No comments: 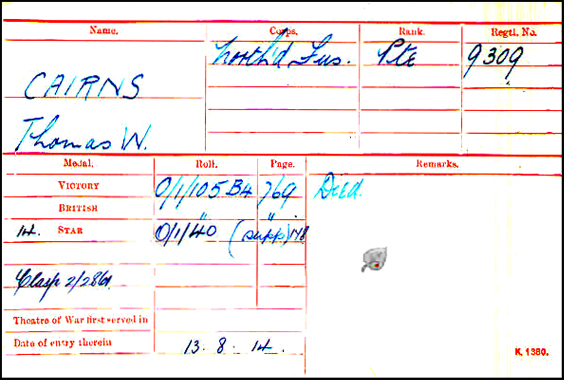 An oak-leaf emblem was sanctioned for those who were mentioned in despatches and was included on the medal ribbon of the Victory Medal, 1914-19.

What the leaf on the above medal card represents I am unaware.

Type of Casualty:
Killed in action


On the opening day of the Battle of Mons, 23rd August 1914, 9309 Private Thomas Wilken Cairns of the 1st Battalion Northumberland Fusiliers was killed in action. He was one of 277 officers and men of the British Army to die on this day.

Thomas was born in Sunderland and was living there when he enlisted with the regiment in 1903. He was probably on the Reserve when Britain went to war in August 1914 but his medal index card reveals that he arrived overseas on the 13th August. Ten days later he was dead. Thomas has no known grave and is commemorated on the La Ferte-sous-Jouarre Memorial.


Posted by Geordie Gardiner at 11:29 No comments:

Ralph Shirley in his publication, The Angel Warriors at Mons. (See the following page of the blog) states:

Miss Phyllis Campbell, relates how a soldier of the Irish Guards, an enormous man who stood over six feet five inches, told her, narrating his own experiences, that "St. George was in golden armour, bareheaded, and riding a white horse." He cried "Come on!" as he brandished his sword.

Why, we may ask, was St. George in golden armour?

Doubtless because the Irish guardsman had seen him most recently on the back of a sovereign.

More likely he knew some really big Geordies, seeing as he probably never had more than a penny to scratch his backside with. 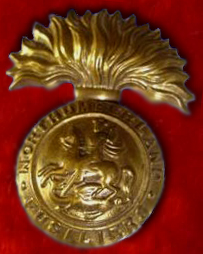 Posted by Geordie Gardiner at 07:21 No comments: 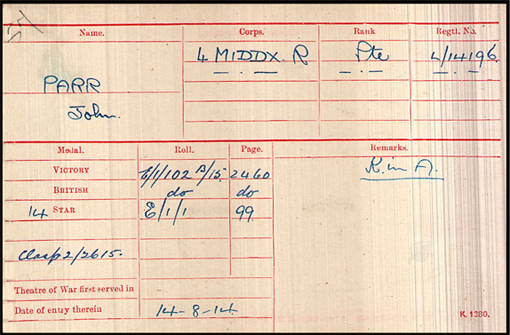 Posted by Geordie Gardiner at 06:01 No comments:


Intimate conversation elicits from almost every acquaintance at least one episode in his life which is what he would call ‘queer’ or ‘rum’. No doubt most stories of miracles are unreliable; but then, as anyone can see by reading the papers, so are most stories of all events. Each story must be taken on its merits: what one must not do is to rule out the supernatural as the one impossible explanation.waterfront memorial Thus you may disbelieve in the Mons Angels because you cannot find a sufficient number of sensible people who say they saw them. But if you found a sufficient number, it would, in my view, be unreasonable to explain this by collective hallucination. For we know enough of psychology to know that spontaneous unanimity in hallucination is very improbable, and we do not know enough of the supernatural to know that a manifestation of angels is equally improbable. The supernatural theory is the less improbable of the two. When the Old Testament says that Sennacherib’s invasion was stopped by angels (2 Kings 19:35), and Herodotus says it was stopped by a lot of mice who came and ate up all the bowstrings of his army, an open-minded man will be on the side of the angels. Unless you start by begging the question, there is nothing intrinsically unlikely in the existence of angels or in the action ascribed to them. But mice just don’t do these things.

1970 God in the Dock: Essays on Theology and Ethics


Posted by Geordie Gardiner at 04:58 No comments: 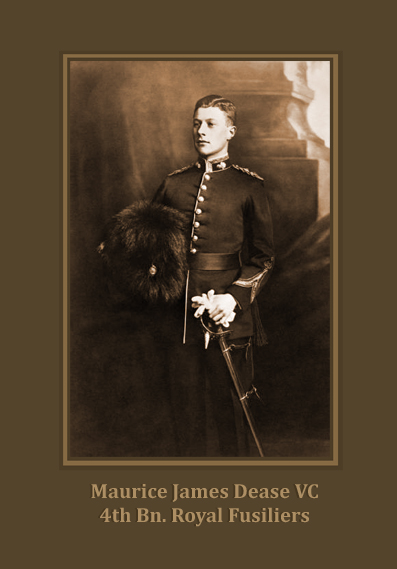 Son of Edmund F. and Katherine M. Dease, of Levington, Mullingar, Co. Westmeath. One of the first British officer battle casualties of the war and the first posthumous recipient of the VC of the war.

"Though two or three times badly wounded he continued to control the fire of his machine guns at Mons on 23rd Aug., until all his men were shot. He died of his wounds." 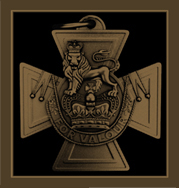 Posted by Geordie Gardiner at 04:23 No comments: 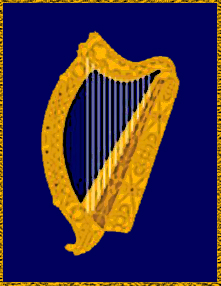 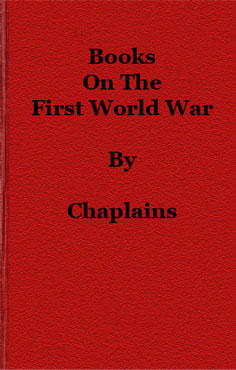